I entered my little guy Mouse in an online poultry show on Backyard Poultry and he won first prize! 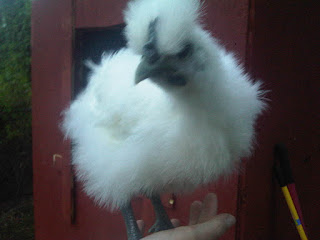 All from an out of focus smartphone camera. Ha!

My little Mouse was named after a dog. Yes, a dog... from an awesome series called The Dresden Files, because I am a super geek.
Take that all of you Silkie purists with your furry footed show chicks. Mouse is a badass. Now it's documented on teh interwebs.