There were some disasters of varying degrees this weekend – garden, chicken, rubber ducky and cooking.

I’ll start with the most serious disaster – my sweet silkie hen.  I’m dealing with my first chicken injury, and I don’t know who is more traumatized, me or the chicken.

My sweet girl Dresdy (who is of course at the bottom of the pecking order) has an open fracture and/or dislocation of her wing. It’s at the end of her humerus. I noticed on Friday that she had a lot of poop on her back and wing area, which she was holding a little awkwardly. I asked Jay if he’d looked closely at her, and he thought it was just poop. I figured that she walked under the area where the other girls were roosting or something. Saturday morning I let the flock out and I decided that Miss Dresdy at the very least needed a bath. So I grabbed her and threw her in the kitchen sink… she had even more poop on her, poor thing. So I started washing away the poop, which she tolerated pretty well. I noticed that she was still holding her wing awkwardly even after I’d rinsed away anything that could be causing her wing to get stuck. Then, to my horror, I saw what looked to be the end of her bone sticking out. I tried to get a better look, but when I moved her wing too much, she started to struggle. I figure that she probably fell backwards off of her roost and hurt it while flailing around – she’s my klutz chicken.

I washed the area thoroughly, rinsed with hydrogen peroxide and smeared her with antibiotic ointment.  I crushed half a baby aspirin and put it in her water with some sugar and have been feeding her scrambled eggs, a large ratio of ultra kibble and mealworms. She’s isolated in a box with wood shavings in the downstairs bathroom. She’s been a model houseguest and has been eating and drinking lots, and seems happy enough - she’s been scratching and making happy noises. I’m sure that she is loving that she doesn’t have to compete for food and water right now.

In my internet research, I’ve seen that some people have amputated their chicken’s wings that have been similarly injured. Believe it or not, she seems like she can use the wing more or less. I need to get a better look at it, but Jay has been working a lot and it seems more like a 2 person job so that she doesn’t struggle. I’m at a loss for what to do… I don’t want her to suffer, but she seems to be okay for the most part and not in any pain. I would think that if she were in pain that she would have been moping around a lot more. Tonight I’m going to let her outside for a little while in a separated area… I’m sure that she misses her friends.

Here are some pictures of Sweet Dresdy in the sink: 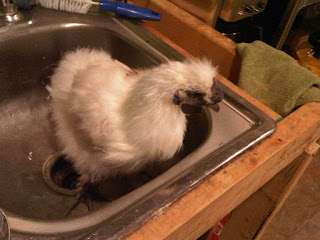 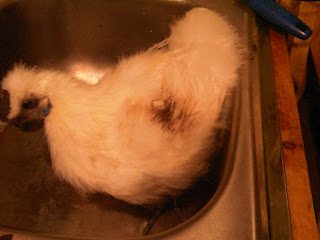 The second chicken debacle happened yesterday afternoon. I’ve been letting the chickens free range whenever I’m home and up to yesterday, they’ve always stayed more or less in the yard. I let them out early in the day and they were fine the last time I’d checked on them, which was around 3pm. At 4pm, they’d vanished; nary a feather to be seen. I was mostly concerned because it was so hot out (nearly 100 degree heat index) and they’d wandered away from their water, which of course is incredibly important on hot days. I was hoping they’d come back, but eventually Jay and I went into the neighbor’s overgrown yard to track them down, since we’d heard chicken noises. We found them huddled by the fence panting and looking dazed. I grabbed Ginger (one of my Red Stars) and we herded four other chickens back into their enclosure. Thinking that they’d be hungry and thirsty, we went back to where the others had disappeared and put down the water. Immediately, the rest of them ran up to get a drink and some treats. I was able to carry two more chickens back that time.

You haven’t lived until you’ve been sans-bra,  in your dirtiest t-shirt and sweatpants, drenched in sweat, getting eaten alive by mosquitoes while in your neighbor’s yard yelling, “Here chicky, chicky!”

You also haven’t lived until you’ve had a chicken tucked under each arm, trudging back to your house on display for the entire neighborhood to see. Again, without a bra.

Eventually we rounded all of our chickens up except for one (our runt that we call Johnny). She came home less than an hour later. I imagine that they all would have come back, but you never know. No more unsupervised free ranging in the backyard until we replace our fence.

The gardening disaster came from our little derecho (Land Hurricane) that blew through Friday night/Saturday morning. My dear husband slept through the whole thing… I thought there was a tornado outside and the entire house was shaking. It was a scary night. Apart from numerous tree branches and other debris strewn about, our garden took the biggest hit. My cilantro was uprooted, along with some onions… my zucchini plant blew over, and two corns stalks blew over, but seem to still be okay. Everything was more or less flattened to the ground. I’ve tried to disentangle my plants as best I can. Fortunately my peppers were shielded by the wind by my tomato cages… they all seem to be doing pretty well.

As far as my garden’s yield, I’ve gotten one cucumber off my plants and I have a few others that are just about ripe. We threw the ripe cucumber in whole with Jay’s pickles. Once I get a larger group ripened, I’m going to make some fridge pickles. Canning them is pointless – pickles don’t last in our house. Jay can eat a jar of pickles in one sitting. No joke. I have a few zucchini that should be ready to pick this week. For some reason, some of the flowers didn’t set fruit. There have been more bees buzzing around lately, so hopefully they’ll get to producing.

My cooking disaster came when I tried to make the bacon ice cream. I don’t think that I cooked the bacon crunchy enough and I probably should have used two baking sheets so that the pieces didn’t overlap as much. I also wasn’t a fan of the amount of buttermilk in the recipe. It ended up making the ice cream pretty sour. Next time I’m going to try for a standard ice cream… maybe vanilla or if I get crazy, mint chocolate chip. Of course what I’d really like to try is making s’mores ice cream.

The smallest disaster took place on Saturday during the 1st annual Marshyhope Duck Derby and Festival, benefiting the library. Angela (HotFrugal)  roped me into volunteering at the Duck Derby by helping to sell books with the Friends of the Library.

How many rubber duckies does it take to fill a front-loader? Apparently about 3,000. 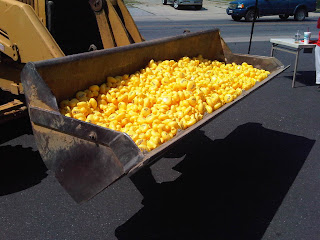 The disaster came after the front-loader dumped the duckies into Marshyhope Creek. The tide table had been consulted and the ducks were supposed to go with the flow of the water towards the festival and finish line. The ducks had other ideas and once they tasted freedom, they headed under the bridge against the current, nestling cozily into the shore on the opposite side of the creek.

There was eventually a re-launch thanks to the Boy Scouts. The ducks finally made the half mile float down to the finish line where the festivities were being held. There was much excitement when the ducks made their appearance around the bend. People were cheering them on, waiting patiently. It took about an hour for them to go the final 500 feet. Oh, and did I mention that it was 100 degrees?

Here they are about half an hour after their re-release. You can see the bridge that they were initially released from in the photo. 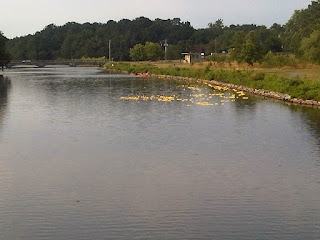 I think that next year, people should be allowed to soup up their ducks with Co2 cartridges or little sails. Although in this case, the sail would have worked against the ducks, as the wind was what caused the problems to begin with.

Here's hoping to having a drama-free week with no more disasters or injuries. Especially since my husband will only be home one day this week. :(

The good news is that our siding is coming in this week! We'll be in home project overhaul for the next few weeks and my BIL's will be here to help... so my house is about to be full again.

Having people around all of the time is a big adjustment for me, as I like my peace and quiet. So I will try to enjoy my time alone this week while I have it, even though I'll miss Jay. Unfortunately, most of my time will be spent catching up on my non-profit job.  Yes, at this point it's a job, not a volunteer position.  It takes up way too much of my time to be anything other than a job.  A dreadful, unpaid job that is not fun and offers me little satisfaction. The organization is great, but I was horribly misled when I took over. Not cool.