Can't make eggs without a kitchen!

Our cabinets have been sitting on the porch for the past month, while the house was being sided. We also had to rip out the old tile, which was a DIY disaster that was installed last year. It turns out that you can't expect thinset to bond tile to plywood. Who knew? So our tiles kept popping up and breaking. We of course spent a large amount of money on said tiles (not to mention the time and back-breaking work). Sadly, our beautiful Canyon Slate tiles couldn't be reused. We had to buy all new tile for the kitchen. 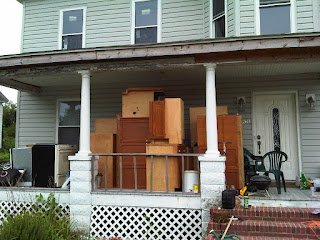 This time, we used tile adhesive when installing the tile. Another problem that we came across was the quality of the tile. It turns out that our tile was on sale for a reason - they weren't perfectly square. Yes, it's an old house and there were imperfections in the floor and walls... however, we found while using the spacers that things weren't lining up quite right. We did the best we could, and the tile actually turned out pretty well this time around. The grout also seemed like it was in more firmly this time and we finished sealing the grout this week. 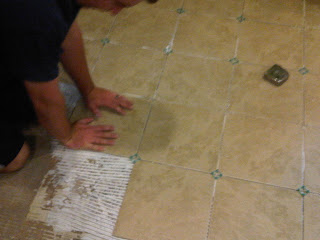 The tiling job took forever because we had to do it around mine and Jay's work schedule, as well as a friend's wedding. Had we had those 3 free days to work on the kitchen, it would've been done already. 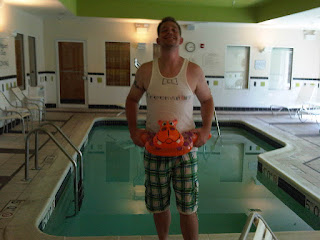 However, Jay did enjoy his time as a Groomsman, even though he was used and abused. One day I'd like to make a post about how NOT to treat your wedding party. Part of my problem - I'm still bitter since this friend was too busy making mojitos to come to our 30 minute rehearsal the day before our wedding. His wedding was of course a huge production; wedding party dance (in hope of becoming a viral YouTube hit) and everything. A short rant:  If you can afford two wedding coordinators and a white horsedrawn carriage to deliver you to the aisle, you should not treat your wedding party like slaves. They should not be hauling around hay bales and helping set up for 4 hours in the heat on the day of the wedding. Nor should their wives have to run errands for you like picking up beer kegs (and carrying them - I'm strong, but dear GOD those things are heavy!!!) the day before the wedding, or picking up ice and find trash cans and horse troughs to put the kegs in. Nor should you act like a total @ss the night before your wedding and nearly get your friends kicked out of their hotel room. After all of this, you should not give your Groomsman a tie with a giant stain on it as his gift. Another complaint - I was sitting in the dark on some hay bales nursing my migraine which developed during the rather unfortunate salty dinner, trying not to puke. They walked over, "Hey Lauren, we're trying to get a hold of the wedding coordinator to contact the shuttle buses, sorry you're not feeling well. Now, do you mind moving? We want a picture sitting here." In hindsight, I should have not suppressed my horrendous dinner. I should have decorated their wedding shoes. No, I just mumbled my congratulations and was helped over to some other hay bales by my husband.Your one special day is not worth your friends despising you - you're going to need them after you're married!

So anyway, we got back to working on the kitchen tile. It took us much longer than I would have liked, but it finally got done and Jay wired up the new outlet for the stove. 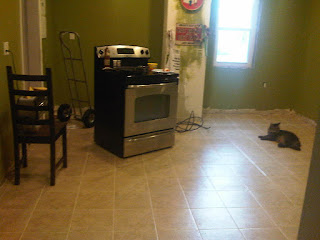 We could finally have our eggs! By this time, we had 3 eggs to eat, so at least we didn't have to split them. 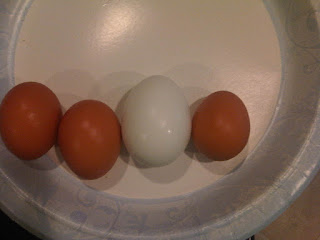 These are the eggs compared to a regular large storebought egg. Each day the eggs get a little bit bigger. Ginger is still the only one laying, but our Black Stars should lay any day now... they will be 18 weeks old on Sunday. Time for them to step it up! 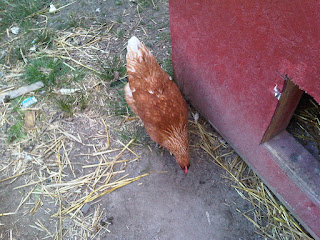 This is Ginger, the only one currently feeding us. 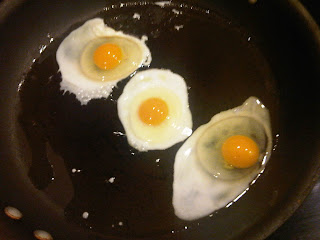 These are Ginger's beautiful eggs in the pan. We cooked them over-easy and had them on buttered toast. It tasted like sunshine. The yolks were so creamy and rich! 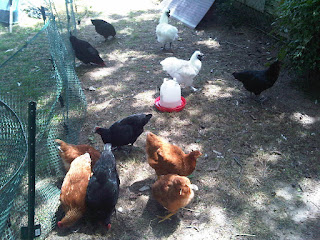 This is our entire flock... one other important update that I forgot:  it turns out that Dresdy is a ROOSTER. I was so mad!! I saw "her" trying to mount the hens and thought maybe she was gay or just confused about what she was supposed to do, but then I heard her crow. :(  I was pretty sure that Mouse was a Roo, and he started crowing a few weeks ago. I was fine with having one Rooster... but TWO? All after I nursed sweet little Dresdy back to health, thinking that eventually "she" would pay me back in eggs and maybe hatch me out some babies (I've heard that silkies get broody, so they're good for hatching eggs).
So I was willing to give a Rooster a try, but I can't have two roos for 9 hens. Deciding which roo to give away was kind of tough, because Mouse was so friendly early on and Dresdy has always been a little standoffish... but then I also nursed Dresdy back to health and took care of him inside for two weeks. Ultimately, I decided that Mouse is the alpha and is the best protector of the flock, so I posted Dresdy on the Backyard Poultry site. I could probably give him away faster on Craigslist, but I want someone who needs a rooster for their flock, not someone who is going to eat him. Silkies are unfortunately an Asian delicacy, so I'm especially wary of someone who might want him for nefarious purposes. Yes, I know that it is hypocritical to say, since I eat chicken. However, Dresdy is my pet, so it's different! 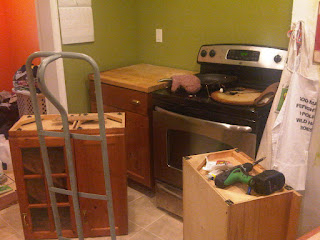 We are starting to move the cabinets inside and arrange where we want them. Jay's aunt and uncle graciously gave us their kitchen cabinets, since they were remodeling their mansion. So we now will have "Airslie" cabinets. I think just having their cabinets in our house has to increase our home's value by a million dollars or so. Here is a photo of their home: http://www.unc.edu/~wrobel/CSHphotos/WineCSHL.html

There is a great butcher's block counter on one of the cabinets (which we're putting by the stove), however, that is the only existing counter at the moment. We are debating over what to do about the countertops. We are pricing countertops now and debating what to do. The least expensive route to go at the moment is to install tile counters ourselves. Then later on, we can upgrade everything to granite or something else nice. We will also be updating the current hardware on the cabinets, as the brass isn't quite our style. Eventually we may refinish the front of the cabinets, but that will be down the road when we have more time and after Jay builds his shed/work area/thing.

After the kitchen is done, we only have one room left to complete!! Hurray!!! :):)

I'm probably most excited that we've decided that once we're done, we're going to have a professional cleaning crew come through and do a thorough construction cleaning. I'm trying to convince Jay that it will be worth the money to pay someone to clean once or twice a month. It's a huge house and it takes a lot of work to keep clean. The cats certainly don't help - I wish I could shave them! No matter how many times I brush them, they still leave hair everywhere. :(

Well that's it for now. We're off to another wedding this weekend (one we get to enjoy instead of participate in!)... it's in the Berkshires for Jay's cousin Keith. His parents are the ones who own Airslie. Should be a great time - I've never been to the Berkshires!

After that, we have no plans outside the area for the foreseeable future and I am so glad. I want to be able to  actually enjoy our house that we've worked so hard on.