For starters, we are finally getting the egg production ramped up, hurray!

We got 4 eggs on Tuesday, 3 on Wednesday, and yesterday we had 2 eggs. I've heard that production can be a little spotty until it gets going. So far, everyone has been laying in the boxes, except for one sans-shell egg that I found outside. It's kinda gross, but I have to show you what it looks like: 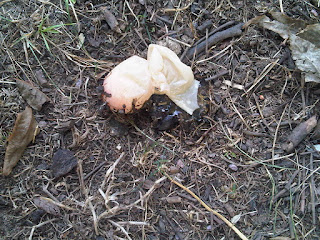 It looks like it's actually two eggs, one with a yolk and one with just the egg white. Pretty nasty. Hopefully that will be the only one! 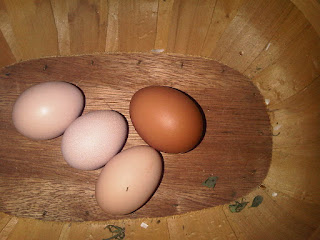 This was the collection from Tuesday. It looks like one of the girls (I think it's the black stars) is laying an egg that is almost a pinkish hue. That is going to be awesome once I get some Easter Eggers (Americauna or Araucana chickens)... I will have quite the lovely assortment of eggs. The other eggs are a light, creamy brown color. Ginger's eggs continue to get larger. They're about medium sized now. She's continued to lay almost every day since she began. I think she's only missed a few days. 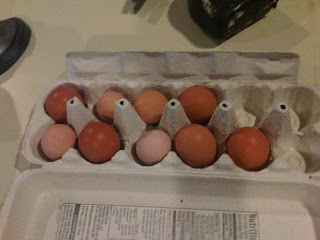 So far, we've collected nearly two dozen eggs in the past week. I hard boiled some last night and had them for breakfast today... they were delicious, but nearly impossible to peel. I've decided to put aside our pullet eggs to make deviled eggs for our party in October. I think they'll be a great conversation piece. And yes, they will still be good in October... eggs are good up to three months! The eggs that you buy in the grocery store are often already a month old. Older eggs are also better for boiling; they're easier to peel.

Why are fresh eggs better? 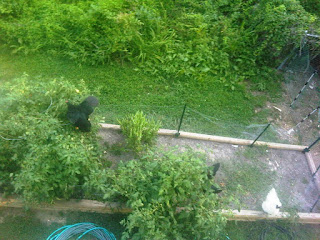 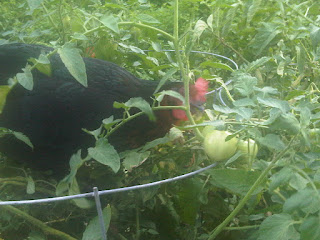 Well, the naughty chickens that get into your garden and destroy your tomatoes! That is Queen Mab, perched on top of a tomato cage. We've probably lost a quarter of our crop to the chickens... not to mention that they've also eaten the tops off of the onions and garlic, destroyed the cucumbers and green beans and are now hard at work flattening my eggplant and zucchini. Naughty girls!!! I really need to find a way to keep them contained. We have a 4' high poultry fence AND we've clipped one of their wings. They can still fly. Ninja chickens.

I love them though... when I get home from work, they run up to greet me and they'll follow me around the yard. Of course, I always reward them with scratch or some kind of treat. They're oddly a lot like dogs, except that they don't sit and stay very well.

On to our handsome rooster Mouse... protector of the flock. We still have Dresden, but I can't wait for someone to respond to my ads. Dresden and Mouse both try to mate with the same hens at the same time, and I'm afraid my girls are going to get hurt. :( 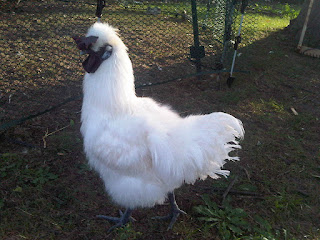 He is definitely a gorgeous bird.

However, when it came to protecting the flock from a stray neighborhood kitten.... 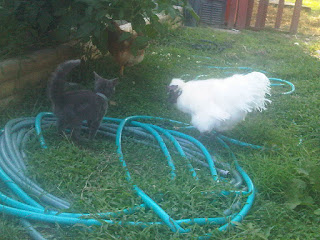 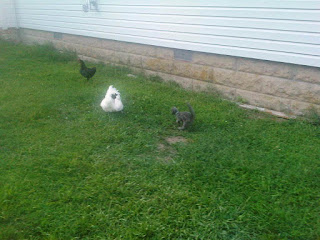 He was a big old CHICKEN!!! 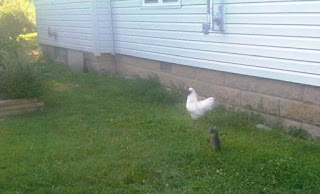 This kitten was about 8 weeks old and a third of Mouse's size. First he puffed up and flapped his wings... then (above) he turned around and RAN! Of course the kitten gave chase, all he wanted to do was play with the feathery things! It was hysterical... I could not stop laughing. I wish that I'd had the chance to grab a real camera instead of using the camera on my cell phone.

And last but not least, I celebrated Julia Childs's 100th birthday by making Connecticut-Style Lobster Rolls for dinner. Simple and delicious! 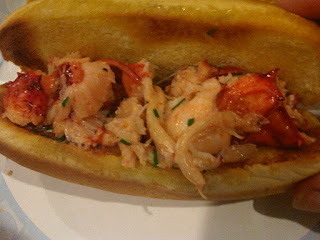 Anytime I travel to CT or MA, I simply cannot leave until I've had a lobster roll... either Connecticut style (hot, with melted butter) or New England style (cold, mayo salad type).

Jay and I attended a wedding in the Berkshires last weekend, and I was determined to find a lobster roll while we were there. We arrived Friday night and by Sunday morning, I had resigned myself to not getting a lobster roll. So, thinking that it would at least be cheaper to buy lobster up there, we stopped at the local grocery store, first stopping at the deli counter to see if they sold cold lobster salad. They did not, so I proceeded to their seafood counter and bought 2 frozen whole lobsters (already cooked) for $20. Good deal accomplished. If I couldn't find the lobster rolls there, I would make them myself once I got home. We went over to the Great Barrington Bagel Co. for breakfast before we got on the road. I ordered an everything bagel with lox and red onion & chive cream cheese. We sat down to enjoy our bagels when I saw a huge sign:  LOBSTER ROLL SPECIAL.  You have got to be freaking KIDDING me. They sold them as a sandwich and also sold the filling by the pound. So I ordered a pound of New England lobster salad.

I'm happy to report that all were delicious, although I think I'm going to have to give the edge to the CT style lobster roll. There is just something that makes me happy about hot buttered lobster, fresh, with nothing but chives and basic seasoning. Fresh food doesn't need a lot of other flavors to mask it... seasoning should enhance a dish, not overwhelm it.

To make 4 CT style lobster rolls, I did the following:

Clean meat out of two 1 1/4 lb lobsters, claw, knuckle, tail & whatever you can squeeze out of the legs
Roughly chop meat
Throw lobster in saucepan over low-medium heat (if cold - if hot lobster, melt butter first)
Butter 4 hot dog buns (I like using potato rolls) with 2-4T of butter
Lightly toast buttered buns under low broiler or in a toaster oven
Melt 4-6T butter in saucepan with lobster
Once heated through, toss with 1/2-1 T freshly snipped chives
Salt & pepper to taste

Throw it on a bun and ENJOY!