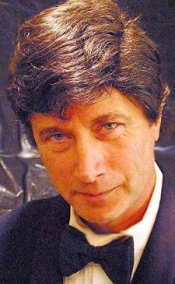 Funny fact about my dad's obituary picture:  He took his own photo. It was his headshot that he used for his performing gigs. He put up a black trash bag over the downstairs mirror and used the timer on the camera.

Mark Grande
Executive Director
Caroline County Council of the Arts
Mark died Friday, August 5, 2005 at the University of Maryland Medical Center in Baltimore. He was 58.
Born in Minneapolis, Minn., Mark was the son of the late Stanley Joseph Grande and Dorothy Ann Kaster Grande. He graduated from Our Lady of Good Counsel High School in Silver Spring and the University of Maryland.
Mark was a self-employed businessman. He owned a bike shop in Glen Burnie for ten years. He moved to the Denton area in February 1980. He had a camera and optical equipment repair business and played music at many venues in Caroline County and surrounding areas in addition to being executive director of the Caroline County Council of the Arts. He was actively involved with the Caroline County Historical Society, and also was involved in a myriad of other organizations.
Mark is survived by his daughter, Lauren Y. Grande of Pasadena; three sisters, Mary A. Grande of Sykesville, Nancy M. Grand of Surfer's Paradise, Australia, and DeDe Ryan of Boise, Idaho; and one niece, Emily C. Ryan of Boise, Idaho.
A memorial service will be held at 11 a.m., Saturday, August 13, at the Moore Funeral Home P.A., 12 South Second Street, Denton, where friends may call one hour before the service.
In lieu of flowers, the family suggests memorial donations be sent to Caroline County Council of the Arts, P.O. Box 292, Denton, MD, 21629. The council plans to develop a Mark Grande Memorial Scholarship in the Arts.


My dad was the first person who told me what "Tempus fugit" meant.

We were in Rehoboth Beach nearly 20 years ago. I was cool back then, wearing my Doc Martens and dyed black no. 1 hair. It was surely during my goth phase; I remember looking for vampire fangs. Back then, vampires didn't glitter and I thought that I had life figured out.

There was a little alley that we walked through off the boardwalk.  The front of the store promised funky things that would appeal to a teenage girl like me. The shop's name was "Tempus fugit." "What a weird name," I said to my dad. "Time passes," he said.  "Huh?"  "Time passes," said dad, ever patient even when dealing with my teenage self. "It means 'Time passes' in Latin."  "Oh," I said, "Whatever."

I have thought about that seemingly insignificant exchange for the past 7 years, especially on this date. Today marks the 7th year of my dad's passing. I suppose that it gets a little bit easier every year, but I still find myself incredibly emotional in the week or so leading up to the date. I am pretty much ready to cry at the drop of a hat. This morning as I waited in line at Dunkin Donuts, I had a hard time keeping it together. Here I am standing in line, sweat-soaked and stinky, sunburned and covered in dirt, with tears running down my face while I updated my Facebook status. I should have known better than to update my status in public:

7 hours ago via BlackBerry Smartphones App

Just finished helping with tent set up for the FACES grand opening. Can't think of a better way to honor my dad's memory than to spend my day with the CCCA. Hard to believe it's been 7 years today.

Seven  years. In that time, there have been so many changes in my life. So many things that he missed. So many times that I wish I could ask his advice or talk to him about something. I wish that I could've made him dinner and shown him that despite being raised on popcorn and sardines that I ended up a pretty good cook.

So as my status says, I spent the morning helping to set up tents for the grand opening of the FACES building - that's the Fiber Arts Center of the Eastern Shore. It was hot and filthy work, but I thought that devoting part of my day to the arts council was a good way to be a little closer to dad today.

After I got home, I played with power tools and put a lip on the front of the chicken's nesting boxes so that they would stop throwing their shavings out on the floor. Afterwards, I sealed the grout in the kitchen, and sang while I worked. I've found singing to be incredibly cathartic and try to do it whenever I'm alone in the house. I know that Jay wouldn't mind, but I feel a little silly belting out showtunes when he's home.

I also had a dinner in dad's honor, while listening to a book on tape (er, mp3 - I know that he would approve)... sardines on saltine crackers, puffin corn (which is a cross between popcorn and cheese puffs - I would've done straight popcorn, but I have no kitchen/stove/microwave working at the moment), and some sugar wafers for dessert. Washed down with a cheap and tasty glass of Two Oceans Sauvignon Blanc. It has a screw top, so you know it's good. Or as my Aunt Nancy calls it - traveling wine! It's good to take on the train when you're going through Europe. :) 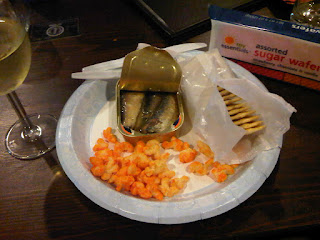 From what I've heard, they're calling for some strong storms this evening. I'm hoping to watch the storms like I used to do with dad.

One thing that I've been doing with my dad's cremains (those are his "ashes" so to speak) is to take a small container with me when I travel. This really all started when I met Nancy in Paris about 6 years ago. She wanted some of my dad's ashes to take back with her to Australia. We took lots of photos of us with dad while we were traveling... in Parisian brasseries and on the high speed TGV. He was always with us. 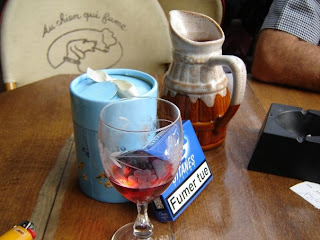 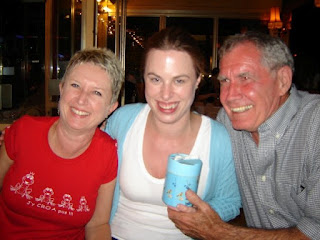 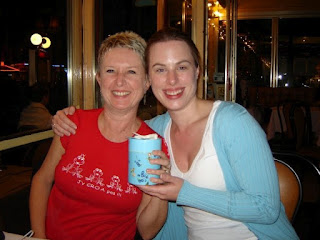 It's all a bit funny, because my dad hated to travel. However, he was a fan of black humor, so I know that he would get a kick out of his remains making their way around the world. He's been on 3 continents and who knows how many countries he's visited.

Here is a list of places where I've scattered his ashes so far:

I feel like there are a few places that I've missed. We've taken him on some trips and never actually scattered the cremains. 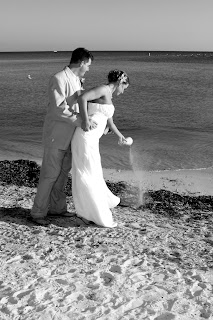 Before our wedding ceremony in Key West 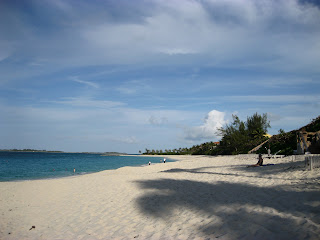 In the shade of palm trees in the Bahamas

Of course my dad hated the beach, but he liked to spend time with me.  He'd grab a chair and park himself in a shady spot. I know he is always near me...he's reading a book in the shade. That's why I can't see him.

Cheers to you, dad. Time may pass, but your memory never diminishes.
Posted by Lauren at 19:14