The drywall is complete in our last bedroom!

The company owner dropped by on Sunday to give us an estimate and said that they could probably start on Tuesday and be done by the weekend. They ended up starting on Monday and finished on Tuesday. If we had done it ourselves, it would've saved us probably $700. However, we wouldn't have done such a nice job and it probably would've taken us two weeks. Now we can realistically be finished this room in the next week or two.

Now all that's left to do is paint, install flooring, and install some wood in the closets (we didn't get them to drywall in there). I can't believe that our house is almost done. 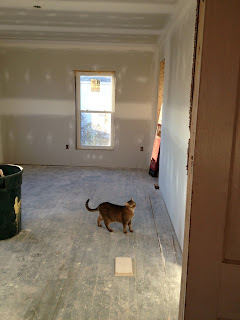