First it was a busy work week, followed by my whirlwind weekend in NYC making the world a better place for women and girls, then I rushed home to batten down the hatches in time for Frankenstorm Sandy. We weathered the storm well except for a leaking light fixture in the upstairs bathroom, the chickens weren't too happy (coop design causes water to leak in through the back wall, but they were dry as long as they stayed on their perches), lost power for a little over a day, got to stay home from work for two days (hurray!), worked a little at home during the two days, then tried to jam 5 days of work into 3... and then it was time to celebrate my darling husband's birthday.

We celebrated last weekend with an awesome buffet dinner at Suicide Bridge Restaurant on Friday night, where I stuffed myself sick. On Saturday, we were invited to tailgate with our friend Jared's father-in-law (that would be the fabulous Laura's dad) at Punkin Chunkin. It was my first time, which is funny since I've lived on the shore for most of my life and we had a great day. At least, until  this loser  decided to decorate me with mud - 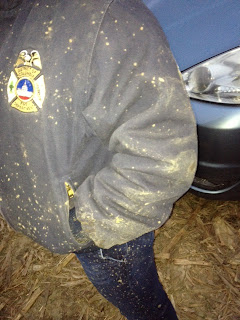 I can only imagine it's because he was jealous of my DCFD jacket. Short version of the story:  Laura's dad had a small fire going for warmth and cooking, about 3 logs that were about 4" in diameter and 2.5 feet long. The fire was going all day, no problem... until about 5pm, when someone pulled up on a golf cart and said that we had to put it out since it was free-burning. Okay, whatever, we'll try. Then they said that if we couldn't put it out then they'd get the FD to extinguish it. We (along with some others who had stopped by to get warm)  put water on it, threw dirt, and stomped on it. The fire was just smoking at this point, no flame at all.

Well then Bridgeville VFD came over with a brush truck to put out what remained of our fire. Sure, fine. Then aforementioned loser stretches the line and starts putting water on the "fire." No big deal at first, just putting a little water on since it was pretty much out. THEN, he starts blasting the coals and throwing mud everywhere. Then people started saying things like, "SERIOUSLY?? What is WRONG with you!?" Probably some other choice words as well. Now mind you, I was standing a good 10-15 feet back from this fire and I got covered in mud - my face, jacket, everything. The next morning I found mud in my ear. The guy never said, "Hey, stand back" or anything. We of course asked his name, to which he replied, "Brian F*cking Willey, remember it!!" Oh, we remembered. I still haven't composed a thoughtful letter to Bridgeville VFD, but I shall.

Sunday (4th) was Jay's actual birthday. We'd planned to lay low, watch football and make some tasty meals, but our friends took us out to lunch at the Jetty to celebrate. I spent a good hour fixing the special birthday dinner, but neither of us was all that hungry because of the late lunch. Bummer, because it was pretty good. 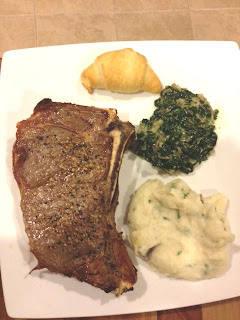 I'm hoping to be a homebody for this upcoming weekend. No big plans and hoping that it stays that way!

As a sidebar, we've decided to hire someone to install the drywall in the final bedroom. It'll cost a lot more, but it will look better and we won't have to worry about it. We just want it to be done so that we can refinance the house and start on the FUN projects... deck, shed/workshop (complete with new chicken coop and Jay's mancave), a new privacy fence, patio with outdoor fireplace. I can't wait to do all of the fun stuff and actually begin decorating our home.