As promised, I am posting my version of my Aunt Mary’s French Meat Pie. 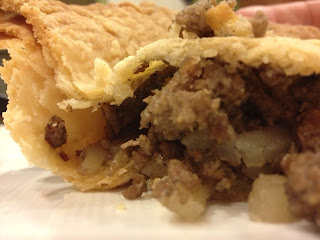 I’ve made the recipe twice and still think that it could use some tweaking when it comes to the potato processing and crust.

My aunt uses Pillsbury Ready-Made crusts, which are a real time-saver. Making these pies can be a bit of an arduous process.  Despite this, I try to make at least two pies out of my batch using homemade crusts. The Pillsbury crusts are great, but I have to say that my favorite and most flaky crusts were those that I made with butter. I experimented with butter, lard, and duck fat and they all turned out delicious. When it comes to using animal fat in pie crust, a 2/3 butter to 1/3 animal fat seems to be a good ratio.

On to the recipe!

This recipe is to make about six 9-inch pies - it makes 6 pies if you are using disposable pie plates and ready-made dough. If you are using deep dish plates with homemade crust, it makes 4 or 5 pies. As previously mentioned, this is a somewhat labor-intensive process, so you should make your pies in bulk. They freeze well and are perfect for breakfast, lunch, dinner, parties, book clubs, and hostess gifts!

CRUSTS
I make two crusts at a time by hand… making all 12 (six top and bottom crusts) would be difficult to do by hand. However, if you use a food processor it might be feasible. Measure 2 1/2 cups all purpose flour and 1 tsp salt into a large bowl. Using a pastry cutter, blend 2 sticks of butter into flour until the mixture resembles coarse crumbs. As I mentioned in my sausage gravy and biscuits recipe, please get yourself a pastry cutter. Once combined, add 1-2 tablespoons of ice water at a time (I mix using a wooden spoon), pressing mixture together until it starts to stick together. Divide in half and form into 2 balls of dough. Flatten into a disk and refrigerate at least 30 minutes (this can be done a day or two ahead of time).
FILLING 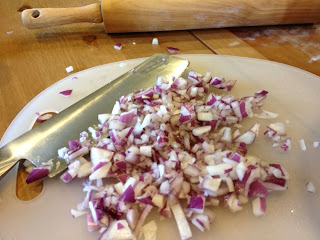 I prefer using one sweet or yellow onion and one with a little more bite – white or red onions. I imagine that shallots would also work well. Throw onions into a large pot (I use a 6 quart stock pot) with the loose sausage. If you can find good local sausage, use it… or even better, make your own!


Again, I must rave about Cedar Run Cattle’s sausage. 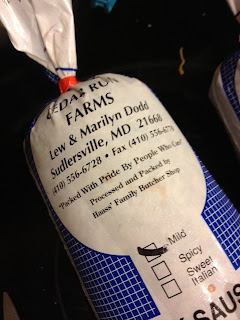 Their sausage is the best I’ve ever had! I used 2 pounds of mild and 1 pound of spicy sausage in my recipe. Having run out of my favorite, I used Jimmy Dean sausage for my second batch of pies and while they were tasty, I prefer the pies made with Cedar Run’s sausage.

So back to the task at hand… brown the sausage with the onions. 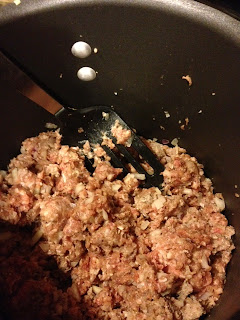 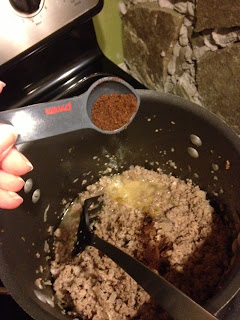 Chop, julienne, or grind your potatoes. My darling husband taught me how to julienne potatoes (it's wasteful, but fast). I have to say that he makes an awesome sous chef. For my next batch, I think that I’ll boil the potatoes first and then use a potato ricer. My Grandma Grande used to grind her potatoes, so the potato ricer might be a good option. 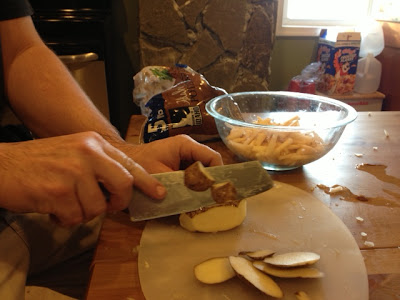 Throw the potatoes in the pot and stir. 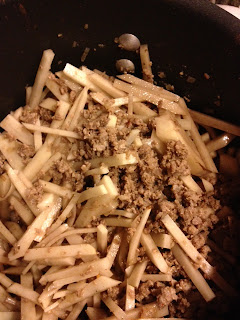 You can either cook this all down on your stovetop until the potatoes are tender, or use my aunt’s preferred method:  Throw it all into a roasting pan, then bake covered at 350 until the potatoes have softened (about one hour). Check periodically and add water and/or stir if you notice anything sticking. Trust me, this method is much easier. 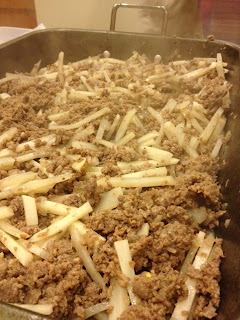 While the pie filling is baking in the oven, prepare the pie crusts. Lightly flour your counter area and rolling pin. Roll out your refrigerated disks into circles that are about 2-3” wider than your pie plate. Holding your plate over your rolled-out crust is a good way to see if they’re wide enough. 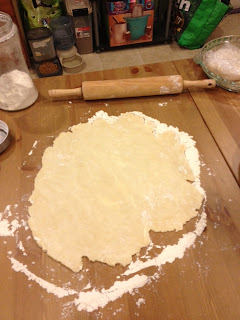 It doesn't have to be pretty, it just has to be big enough to fit in the plate. Pie amoebas are perfectly acceptable. 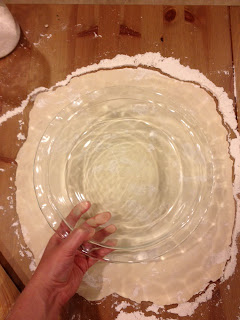 I have a few pie crust tips for you first-timers. Always roll in one direction; don’t go back and forth. Once you’re done rolling in one direction, turn your pin about a quarter of the way each time (think of a clock dial) and roll in a new direction. Roll slowly and I promise you won’t have nearly as many problems. Trust me, be patient. My first few crusts were a disaster, but I’ve gotten better with each crust I make. Use the rolling pin to transfer the dough into the pie pan. 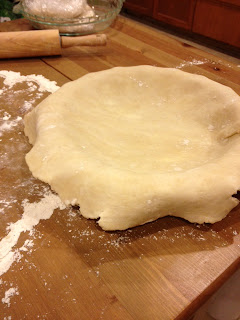 Once the potatoes in the filling are cooked, let cool slightly. Divide filling evenly between pie crusts. 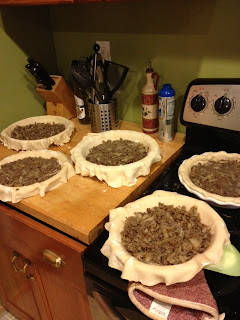 Place top crust on filled pies and flute. I’ve found that the best thing to do is first tuck any excess dough up under the edge of the crust and press with my thumbs to seal. Then I use my thumb and index fingers to make the fluting. YouTube is a great source for learning how to flute. I can tell you that it’s difficult to make a nice edge when you have fingernails, so cut them short for this task. 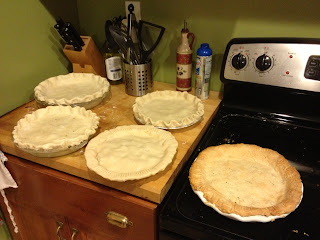 If you discover that fluting isn't your thing, press edges together and use the tines of a fork to make a decorative edge.

If you’re going to serve the pies immediately:  Prick the crusts and bake at 400 for about 30 minutes, or until cooked to the crust color or doneness that you prefer. You may need to cover the edges to prevent burning.

If you’re going to freeze the pies: Prick the crusts and let cool at room temperature. After pies have cooled, cover tightly with plastic wrap (I love Glad Press & Seal!) and a sheet of foil.

Baking frozen pies:  Remove foil and plastic wrap. Bake pies in a preheated 400 degree oven for about an hour (or until crust is done to your liking). You may want to cover the edges to prevent them from burning.

Serve with ketchup. I also love to top my pie slice with an over-easy egg. It is the perfect addition to this dish, especially for brunch. 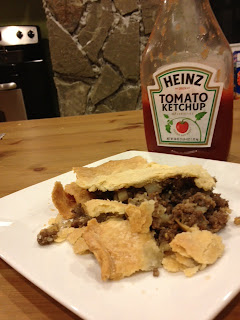 Look at all that delicious crust!!