I haven’t had a slice of bread in three weeks

It’s probably the longest I’ve gone without having bread, rice, or pasta in my life. What I wouldn’t give for a fresh crusty piece of French bread slathered in mashed potatoes and angel hair pasta. Mmmm.

In reality, Atkins is not that bad. The first week was the worst for sure… I felt so bad on the fifth day that I had a PA at work check my blood sugar because I thought I was dying. Turned out that I just needed some delicious salty chicken broth. Your electrolytes can get all out of whack on Atkins, especially during that first week.

There have been some other discoveries, like when I realized that this delicious Caffe Breve that I’m drinking is full of carbs. Crap. I looked at a carton of half & half and assumed that they don’t put that much in the drink. Well… yeah. This drink has at least 16 grams of carbs in it. Crap. Crap. Crap. I decided to search the interwebs about the amount of carbs in a Caffe Breve and it was bad news. So no more lattes, breves or anything. From now on, I’m sticking to brewed coffee with heavy cream and sugar free sweetener.

The other discovery I’ve made is that the Atkins bars and shakes have made me stall. I bought them probably a week or week & a half into the diet when I thought I was going to die. I needed something crunchy and sweet, and they fit the bill. Depending on my cravings, I’ve been eating anywhere from 1 and 3 of those Atkins shakes/bars/treats. Well, the last week hasn’t been good. I drank too many sprite zero & vodkas at a party over the weekend and have probably not been counting carbs as well as I should. This weekend will be another challenge – a one year old’s birthday party and a fun night out with my girlfriends in Baltimore. I think that I’ll choose a drink like vodka and club soda so that I can pace myself better. Those Bacardi & diet cokes and sprite zero & vodkas just go down entirely too smoothly.

My results? The first two weeks were great! The first week I lost 4 lbs and the second week I lost 3 lbs. Week 3 = 0 pounds. In all fairness, I haven’t been great about going to the gym. I’ve only been going about once a week. Starting today, I’m going to be more disciplined. No more Atkins shakes/bars/treats or fancy coffee drinks. Gym no less than three times a week. No alcohol other than vodka & club soda – and those sparingly.

So last weekend I faced a dilemma… what to make for a party. I googled “low carb appetizers” and came up with a bunch of different recipes for stuffed mushrooms. Most of them called for mayo mixed with cheese and artichokes. YUCK. Straight mayo? No thanks, I’ll make my own concoction.

I ended up making shrimp cocktail and my own version of artichoke dip stuffed mushrooms. Both were gone in fifteen minutes… so I’d say that people liked them!

Here is the recipe… it was incredibly simple! 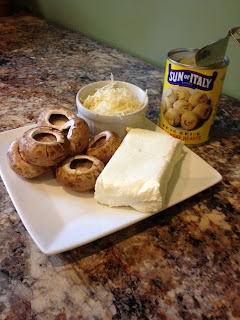 This made about 40 stuffed mushrooms with 1/4 cup of dip leftover. 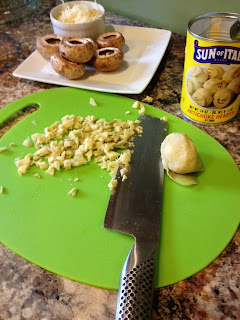 Drain and finely chop artichoke hearts. I removed a few of the outer leaves if they were too fibrous. 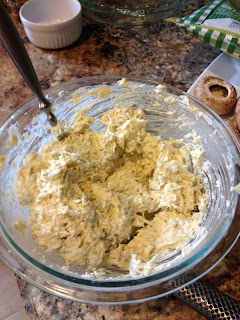 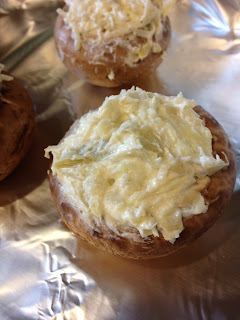 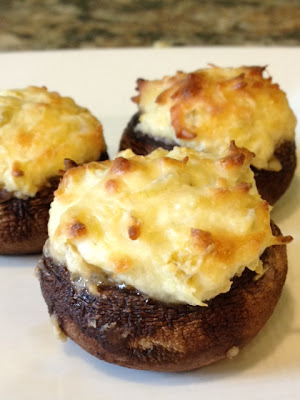