I’m afraid that some of my new babies are mean little assholes.

I came home from work a few weeks ago to find one of my white marans chicks covered in blood with a degloved neck. She was a little over two weeks old. Her buddies caused this injury by pecking the hell out of her. Poor baby. Apparently once they see blood, they keep at it. It can get pretty nasty.

(BTW, do NOT look at "degloving injuries" under Google images - you'll be sorry!!)

I’m sorry for the graphic images, but I hope that this kind of info might help someone else whose chick ends up with a similar injury. 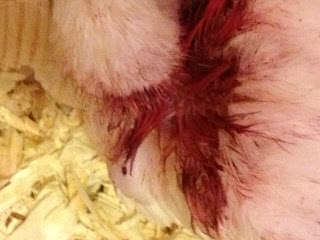 My first thought was that she was a goner. However, she seemed happy, so I wasn’t going to give up on her.

I separated her from the others and put her in a bin in our tub. I crushed up a tiny amount of aspirin for her water and put some triple antibiotic ointment on the wound. In hindsight, I wish that I had irrigated it with saline or watered-down betadine solution to get out anything that may have been in the wound. 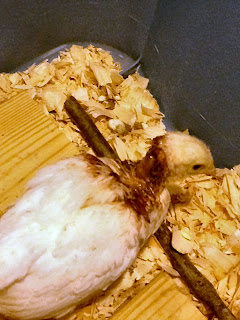 She wasn’t thrilled with the antibiotic ointment and shook her head like a wet dog every time it was applied. I ended up wearing a fair amount of it each time I put it on. She also liked to scratch at the wound with her foot, which was just awful to watch. Ugh. I tried to put some nonstick dressing on it, but getting it to stay was pretty much impossible, so I gave up.

I applied the ointment every morning and evening. The entire time she was eating and drinking normally like nothing had happened. She kept flying out of her bin and pooping everywhere. NBD, just hanging out with this giant hole in my neck. She was also lonely and incredibly sweet. She peeped incessantly until you would hold her. Every time I would pick her up, she would run up my arm and nestle into my neck.

One day I didn’t get a chance to do the ointment in the morning and by the time I checked on her at night, the wound had started to scab over. It had been 5 or 6 days, so I decided to leave it alone and let it continue the healing process. 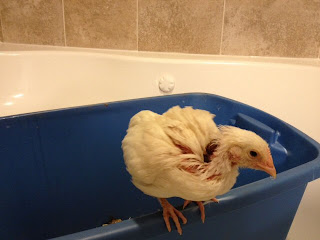 The wound continued to scab over and heal. After she’d been separated from her tormentors (who were moved out to the new coop) for about 9 days, I decided to attempt a reintroduction. After all, as I mentioned - she was flying out of her tub and crapping EVERYWHERE. She had become quite the sweet annoyance. So I sprayed BluKote over her wound and the area around the wound to discourage picking and pecking. It didn’t go very well initially. The big meanies started pecking at her again and she made no attempt to get away from them. 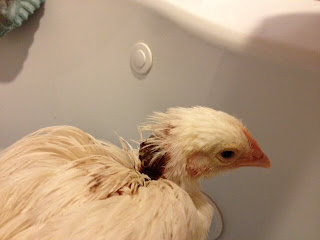 So I grabbed a cat carrier and threw her in it inside the coop. That way they could see her, but they couldn’t get to her. Yesterday morning I went in to change her food and water and she flew out. She went up to some of the other chicks and started pecking at them and basically acting a little crazy. They seemed to be leaving her alone, so I crossed my fingers and went to work. When I got home, she was doing great. There were no new marks on her and she seemed like she was getting along with everyone.

So that is the happy story of our little white marans chick Lucky. We hope to have no more misadventures with the new flock of babies, who turned five weeks old yesterday. 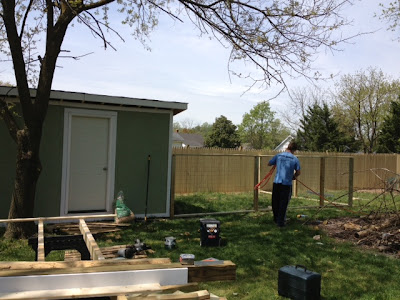 We are hoping to officially introduce the big girls to the little ones this coming weekend. They have had supervised visitation over the last week and the little ones seem to know to stay out of the way. I’m keeping my fingers crossed that we can get everyone into the same living quarters this weekend – before our trip. Although we don’t actually leave for Australia until next Saturday, we are leaving for NJ and a friend’s wedding on Friday.

Fortunately we have a small army to take care of all the critters. A book club friend's daughter is taking care of the critters, and if she can't make it either my friend or her fiance (who is the E.D. for the Humane Society) will stop by. There are a few other friends who have offered to stop by and check on things too. So I know that we're leaving our house and pets in good hands.

I’ve started to pack and have been making good progress. I had been having nightmares about forgetting things for the past few weeks, so I decided that I needed to take some action.

Exercise and diet have still been good - exercise moreso than the diet. I've had a few cheating days with the diet, but I've still been averaging at or under 50-70 net grams of carbs a week. I'm swimming one or two days a week, walking and doing the elliptical one or two days a week, and over the weekend, I used the post hole digger for a few hours. Let me tell you, that is HARD work. I don't think I could cut it if I had to do manual labor.

My weight is still at a plateau, but I feel like I'm more fit and healthy than I was a month ago when the plateau started. I don't have any good recent pics of me, because I avoided cameras for the latter part of last year. For real. I felt huge and tried to stay behind the camera instead of in front of it. For my Wordless Wednesday post, I'll be posting some of the few recent-ish photos from the last year or two, plus a current mirror self-portrait. They're all the rage on Facebook, you know. Maybe I'll even do the pouty face!