After a lot of soul-searching and many weeks on Petfinder, Jay and I decided to go the route of a breeder instead of getting a rescue dog. Rescues seem to have so many hoops to jump through (i.e. home visits, questions about children, etc.) that we just decided that it wasn't worth it. We also had to be honest with ourselves: Did we want to spend the time and energy in caring for a dog that might have been abused? My cats are both rescues and I do give money to our local rescue group. Maybe we'll even be doggie fosters at some point.

The other issue is that most of the local rescues have an overabundance of pit bulls for adoption. I know that the breed is unfairly demonized, but I also didn't want to take the chance with one. And call me shallow, but I think they're kind of ugly. My sister in law has a wonderful pit-lab mix who is a great dog. However, I just really don't want anything that could be mixed with pit.

But I digress. Growing up, we had a wonderful Vizsla named Arrow. Jay and I discussed the qualities that we wanted in a dog. Something with a low-maintenance coat, intelligent and obedient, a larger size, good with kids, and with strong protection qualities. The latter mattered to Jay more than me, but apparently he is worried about me staying home by myself while he is at work.

We used a breed selector tool and the Belgian Malinois turned out to be one of our top matches.

This type of breed is commonly used in the police and military. We were also familiar with it because one of our favorite shows, Person of Interest  has a regular cast member who happens to be a Malinois. His name is Bear.

They also have a strong herding instinct, so we can use him to round up our chickens when they get out. :)

Anyway, over the weekend I found some breeders in Maryland. After submitting a request for information to Triple E Kennels, I received an immediate call from the owner, Ernie. He grilled me for half an hour about what kind of dog we were looking for, did I have any experience with dog training, what did I know about the breed, etc. I was starting to think that maybe getting a dog from a breeder was a bad idea after all of his questions!

However, Ernie just loves his dogs and is passionate about what he does. He wants to make sure he is giving his pups a great home.

So we went out to Meet the Mutts (as Ernie put it) on Sunday. 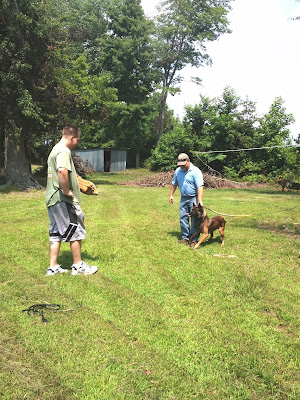 Ernie breeds his dogs for primarily for protection, police and military use. He showed us the skills tests that the dogs are put through. These are shutzhund  (German for protection dog) tests. The dogs are highly trained and obedient. The photo above is Jay with the bite sleeve on getting ready to be bitten by Tim, who will be the father of our future pup. Tim was the only dog there that we weren't able to pet. Mostly because we didn't want to bleed. That said, we were able to pet the other five dogs there... the only thing I was worried about with them was licking me to death. And that was even after doing the bite sleeve test with Bilana (below). 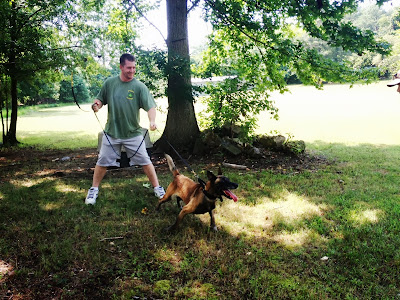 This is Jay with Bilana (she was imported from Belgium), preparing to participate in a suspect apprehension drill. She nearly pulled me off of my feet during my turn. Despite Bilana weighing a third of my weight, she is crazy STRONG. 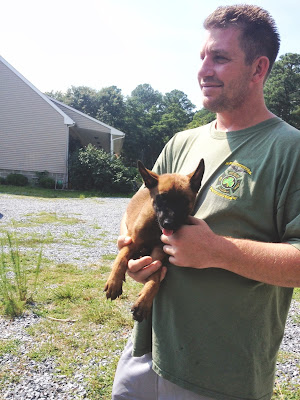 This is one of the pups from a recent litter that we were able to meet. This little guy was 9 weeks old. We won't be getting our pup until the end of the year, which will give us time to get the fence up, get a crate or two, and puppy-proof the house. I'm keeping my fingers crossed that he will be ready to be picked up on or shortly after December 14th, so that we won't have to waive the first litter or find someone to watch him while we're in the Dominican Republic. I don't want to miss any fun cute puppy time with our new family member!

So it looks like we are going to have a legitimate guard dog. Not to worry, because we are going to take our pup to train with Ernie. Jay is overjoyed and can't wait to get into this kind of thing. The thing is, the training isn't something that we can half-ass or do on our own. So on top of the obedience, we'll be doing shutzhund. We might even start taking our dog to competitions. We'll see. I did teach my Vizsla to jump through a hoop. It's been a few years, but I'm sure that I've retained some of that knowledge. Biting a sleeve and jumping through hoops has to be the same kind of thing, right?

If I say Stellen, you might want to run.