Who has two fins and her PADI OW certification?

It's official: I am now a certified PADI Open Water Diver.

Unfortunately I have no pics of me in gear... although wetsuits aren't all that attractive, so maybe it's for the best. The quarry was the perfect temperature, about 72 degrees (although under the thermocline was a chilly 57) and with a 7mm wetsuit, we were comfy for most of our dives. Sadly, the visibility wasn't the best - only about 15'. John said that he's only seen it that bad after a hurricane. It seemed that there were a lot of students there to stir up the bottom. So I guess it was all my fault that the visibility was bad. :-P

We are debating whether we will do our Advanced Open Water course before going to the Dominican, while we're there, or some other time next year. Some students were doing their AOW checkout dives this weekend. Saturday night they were doing their night dives, so we went down to the dock to watch. 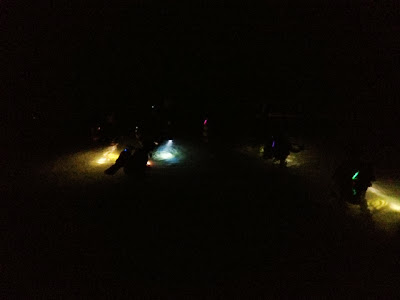 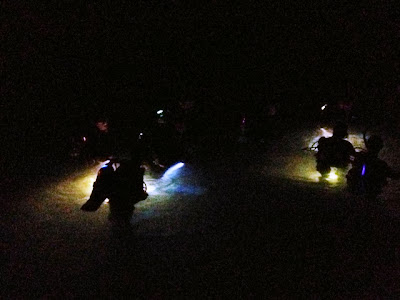 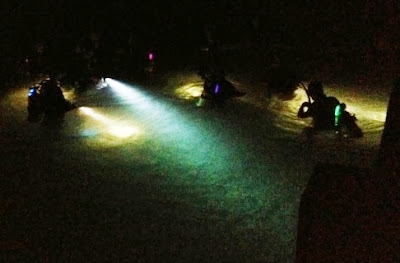 Watching the lights underwater was neat, but also a bit eerie. It was funny to watch the navigation portion of their dives as the buddy teams strayed 90 degrees off their course, ending up on the other side of the dock somehow. We had our navigation skills to do the next day, so we probably shouldn't have had such a laugh at their expense.

Nearly half of our OW class from AACC were there to do their checkout dives, so it was nice that we knew some of the people there. Oddly enough, we ran into two of our classmates at a rest stop on I-85 on the way down. We ended up camping next to them and hanging out with them for the weekend. We dubbed our group "Future Facebook Friends." Fortunately, the four of us ended up in a group together for our dives and we were all pretty comfortable with our skills (unlike a few of our classmates who failed their classroom test - yikes!!!).

On Dive 4, our Divemaster dubbed us Team Awesome. Of course, that might be because the weekend before she had taken out a group of kids who weren't quite ready for their checkout dives. Apparently one of them spit out their reg and bolted for the surface. One of our members even had their mouthpiece break and then calmly switched to their alternate air source. I'd buddy with any member of Team Awesome any day.

And my favorite pics from the weekend: 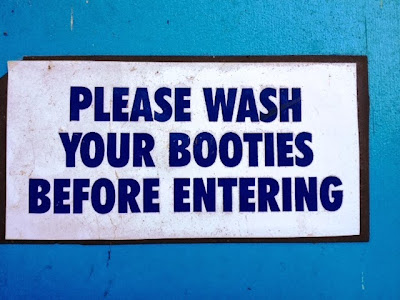 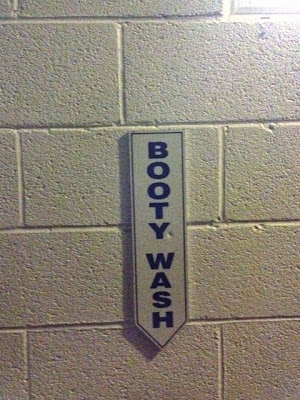 The next time we dive at Lake Rawlings, we will leave early on Friday and arrive on Friday evening. Getting up at 4 a.m. on Saturday, driving four & a half hours (then after arrival, hiking down to the quarry from the campsite wearing 60+ pounds of gear) was a bit much.

So that's all for my weekend adventures! More adventures to come next weekend... I am headed to Lewes for the weekend with a bunch of awesome ladies.