On the first morning of the Food Stamp Challenge, I did a lot of thinking. 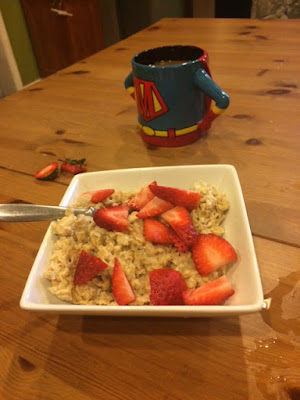 Here are my rambling thoughts that I dictated as I was cooking my oatmeal Sunday morning:

As I was cooking my oatmeal and making my coffee, I thought about how my aunt had made us oatmeal in Australia. While we were there, we also ate a lot of fresh fruits and vegetables (mostly fruit) that they had grown from trees in their yard. Bonus: their neighbor has an avocado tree. Fresh guacamole every day sounds good to me!

While making my oatmeal, I also began heating the pot of black beans that had been soaking overnight. The bean experiment was also to help assuage my fear of cooking with dry beans. I’d had a disaster attempting baked beans at Mark’s birthday party last year. Nobody likes crunchy beans.

While cooking my oatmeal and heating the cold beans, it made me start thinking about other countries (the beans made me think of our trip to Mexico) and how they eat. It also made me consider the obesity epidemic in America. Why do we have such a problem and why are we so fat?

Taking the food stamp challenge has made me rethink a lot of food choices just for affordability. I think part of the problem that we have in America is that there is so much variety of food. You can get nearly anything anytime you want it, and we don’t tend to eat seasonally like a lot of other places. Germany has Spargelzeit - a season (and festivals!) devoted to asparagus.

If you travel in Mexico or other countries in the Caribbean, they eat a lot of rice and beans. They’re cheap and are a good source of nutrients. They also eat a lot of fresh fruits and vegetables, and often grow them themselves. It seems that their fresh vegetables for some reason are less expensive than ours. At least if you shop in their regular stores: you know - the ones that tourists don't go in. Or the cheap roadside stands selling produce for next to nothing.

I was also thinking that this challenge would be easier during the summer when I can grow some of my own vegetables. However that is also a luxury that most people on food stamps probably don't have. I would imagine that most of them don't have access to grow their own fruits and vegetables.

It makes me think how more cities could offer Urban Gardening initiatives to help those on food stamps eat healthier.

Other thoughts on this challenge at the start:

Eating healthy on SNAP requires a lot of cooking.
I'm not sure how anyone who is working a full-time job with kid(s) or especially a single parent would have time to do this. This also brings back some memories from my own childhood. I didn’t realize it at the time, but we were pretty poor when I was growing up. My dad also wasn't the greatest cook. I always joke that I grew up eating nothing but popcorn and sardines. It is the honest truth, at least at home. Our staples were sardines, popcorn (air popped, of course), bread (made with dad’s yard sale bread machine), Ramen (Dad never bought it unless we could get 6 packets for $1- that’s what he thought was a good deal), and of course fruit on the bottom yogurt which we mixed with dad’s special Life Extension MixPowder (oh the irony – my dad died at 58). Geez, this stuff is $60, no wonder we were poor!

Apart from that, we ate out twice a week. Monday night was two-for-one pasta night and usually Thursday nights we would go to McConnell’s for a 3 piece dark fried chicken meal, which we would split.

Dry Beans take a LONG time to cook.
They were finally done around 8 p.m. after an overnight soak and about 12 hours of low heat. I think next time I’ll do them in the crockpot.

I am incredibly fortunate.
I don’t feel like I need to explain this one. My husband and I both have good jobs and can easily afford not only life’s basic necessities, but can also afford to eat out regularly.

Jackie is Awesome.
Jackie is a friend who has been organizing a diaper drive for the past several years. Last year, she organized a drive that donated 18,186 diapers (along with other supplies) to St. Martin’s Barn.
Currently, there is no program in place to provide diapers to low income families. I can’t imagine trying to keep Markface fed, let alone having a dry bottom while struggling to make ends meet.

And finally:
I already screwed up on the challenge. I blame Jay. He invited his cousin & wife over. When I heard they were coming over, I said, “Oh okay… are they coming over for brunch? I can make eggs benedict!” Jay replied: “No, they just want to hang out. They won’t be here long.”

Which of course resulted in our eating pizza that night because they visited for six hours. I started out okay – I already had my pound of cheddar cheese to put out for snacking, and a sleeve of crackers that cost about .50 if I needed to figure those into my budget.

If I had known, I would have planned accordingly. I was hoping that they were coming over for eggs benedict, because I knew that I could make it work in our budget, along with having ham for sandwiches in the week. Although some may consider it fancy, you can make eggs benedict for about $8.50 for 4 people. That comes to $2.12 instead of the usual $1.57 per person for meal, but it’s an incredibly rich dish and would be considered more of a dinner type meal.

Also, my dog ate half of my mozzarella when I walked out of the room after shredding, so I’ll be eating cheddar for my snacks instead. Jerk! 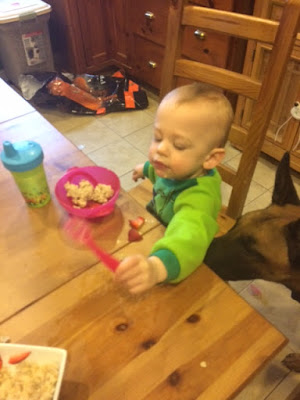 Here is what we would have had for our meals yesterday that I had planned: 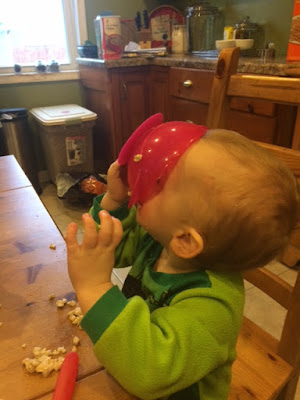 Monday is a new day. I have fridge oatmeal prepared and ready for breakfast. I just need to cut up some strawberries for the top. I’ll toast an English muffin and eat a banana. For lunch, I will have soup. Dinner will be my version of a burrito bowl: rice, black beans, tomato salsa, ground turkey, cheese, lettuce & sour cream. Hopefully there will be enough leftover for lunch on Tuesday. Dinner Tuesday will probably be the roast chicken that I planned to make on Sunday.