Also known as the party that I spent entirely too much time on Pinterest.

In case you haven't figured it out, it was a fish/shark/under the sea themed party.

Initially it was supposed to be a Finding Nemo themed party, but when I asked Steve to make the cake, I told him Fish/Shark/Nemo and let him go with it. After all, leave the cake making to the expert. I think that I mentioned before that Steve was a semi-finalist on the Holiday Baking Championship, right?


Needless to say, I was thrilled with his creation!


For my kid-level table, I had plates and utensils down low to reach, as well as cheese (Shark Teeth), grapes (Seaweed), puff'n corn (Coral), pretzel sticks (Driftwood), and goldfish served in a fish bowl with a fish dipping net.

The kids seemed to really dig this table. At the end of the party, they grabbed the bucket of "Coral" and Mark kept dumping net-fulls of goldfish onto the table, plate, and floor.


Other winners of the day were the bouncy house, which I got for free through Jay's fire department buddies. Those things are worth their weight in gold for keeping the kids occupied. Parents could actually hang out and enjoy some cocktails. Speaking of which, our signature cocktail was a Shark Bite, which was basically a Moscow Mule made with Blueberry Vodka and garnished with blueberries.


The other hit was our impromptu photographer, as well as a super fun shark cutout that I ordered from Oriental Trading Company. Laura graciously grabbed my camera and started shooting without prompting... now I have amazing photos for my blog as well as some to share with the attendees. So THANK YOU, Laura!


The food items that didn't quite make it to the table:

The Octopus Dip was supposed to have an octopus made out of a pepper sitting in the middle of the dip, but I ran out of time for that. I also was planning to carve a watermelon shark. It took me weeks to prepare for the party between making the food tags, ordering decorations and goodie bags. I completely forgot to take pictures of those, but they were these adorable fish bags that I got from Oriental Trading. I filled them with Nemo Stickers, bouncy balls, snacks, bubbles, and also candy shark tooth necklaces.

The day before the party was incredibly frustrating for me, as I had a lot of interruptions that ended up with Mark not napping and everything taking five times as long without my usual 2-3 hour window to get stuff done.


I have to say that I was pretty pleased with how my sand dollar cookies came out. I started off by using this recipe from Odense, but then I realized that I had more almond paste than they called for. So I added more butter and more flour. They turned out pretty tasty! I'm going to work on tweaking the recipe and will post it soon. The reason I decided to use almond paste is because I ordered a bunch of it when I made my own rainbow cookies and the paste expires in October.

I let Steve have free rein over the design and type of cake. It was a vanilla cake with vanilla buttercream. I love that he dyed it red... the inside looked just like sashimi, which was a bit disturbing but also entertaining! 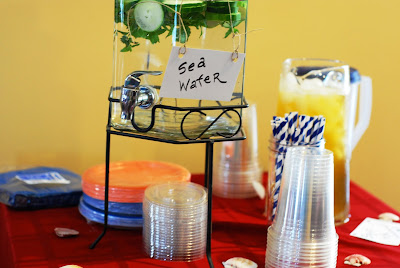 I almost forgot our drinks - sea water (water with cucumbers and mint, still attached to their stems to look like seaweed), and squid ink (iced tea). For the grown-ups, we also had a variety of beer, including Landshark - which I hadn't even thought about until the party was nearly over. 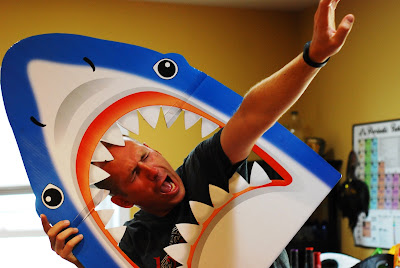 A few folks hung around after the party wound down, like our friends Jen and Tim. Since we're now officially part of the friends with kids crowd, we have to get our fun in whenever and wherever we can. I love spending time with my kid, but it's nice when I get the best of both worlds. I feel like I'm away from him plenty with working full time, plus all of the weddings (6 this year!) and other social engagements we have. It's nice to be able to enjoy some combined adult and kid time, especially when everyone is having a good time.

I hope that you enjoyed Markface's 2nd birthday highlights. If you need more ideas or want to see more pictures, there are hundreds on the Shutterfly site.